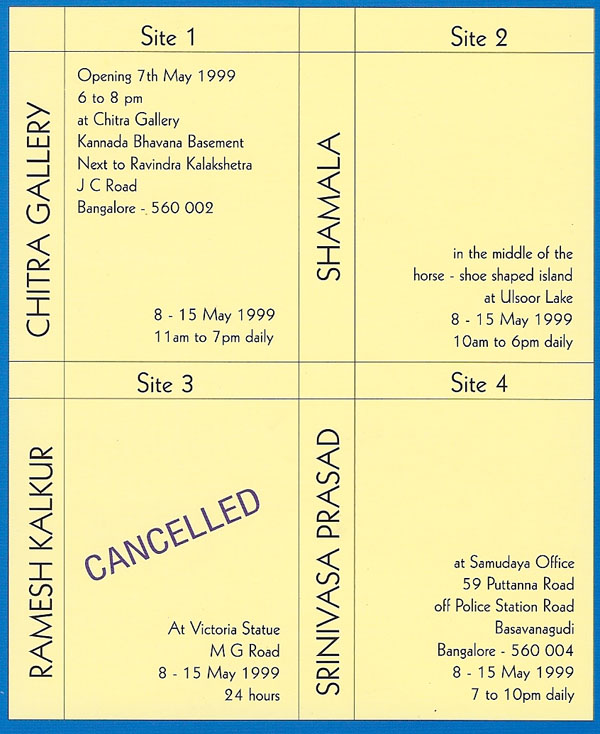 The title of the show Sthalapuranagalu, which translates from the Kannada to mean Place Legends, usually refers to the tales woven around holy sites in a vivid and popular style. At the end of 1998, I worked on a project with three artists whose work interested me for their performative and interactive qualities, to make large public installations which would converse with three symbolic places in the city of Bangalore . The sites we chose were the Ulsoor Lake in the Cantonment area, the Statue of Queen Victoria at Mahatma Gandhi Road and the Samudaya House at Basavangudi, all important markers of different histories. I wondered if we as artists could intervene to break the mind numbing exhaustion of negotiating this city: to somehow excavate its histories, its memories and its associations, and pin down images in the fragmented and amorphous quality of life here – not in a flaccid, sentimental way but with critical thought and study- using the strong sensual language of art with all the rawness of the direct physical encounter.

We  worked for six months on the project. The actual process of organizing the show, making the works and getting the funding would also be way of understanding the working of the city. 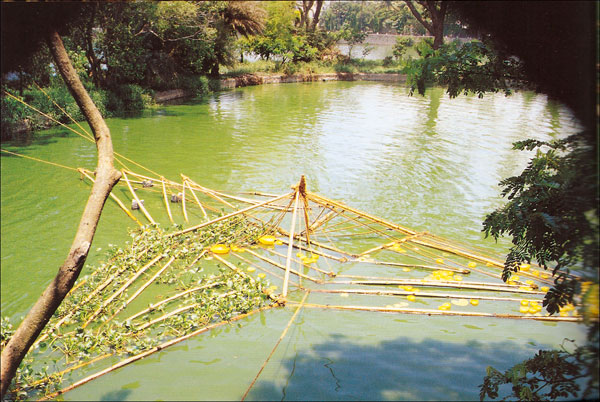 The Kempe Gowda family which founded Bangalore constructed the Ulsoor lake, the temple and the village around it. The Survey of India of 1894 says that Ulsoor Lake, then known as Alasuru, extended over an area of 125 acres and was constructed during the second half of the 16th century.

Shamala, who is interested in ecological and environmental issues and these in-between places of the city, wanted to reclaim the history of the lake, now toxic and dead, and create a sacred and contemplative space by using natural materials and the elements of earth, water and sky.

Shamala’s meditative, poetic sculpture made of bamboo, beeswax, rope and water hyacinth, floated in a pool of water in the middle of the large horse-shoe shaped island in the lake. The journey by boat from the clubhouse on the shore across the water and the walk around the island in the shade of its rain trees, through the rustling undergrowth of its ferns and plants, the sound of birdsong and the splashing of the water, became intermingled  with the experience of her work… 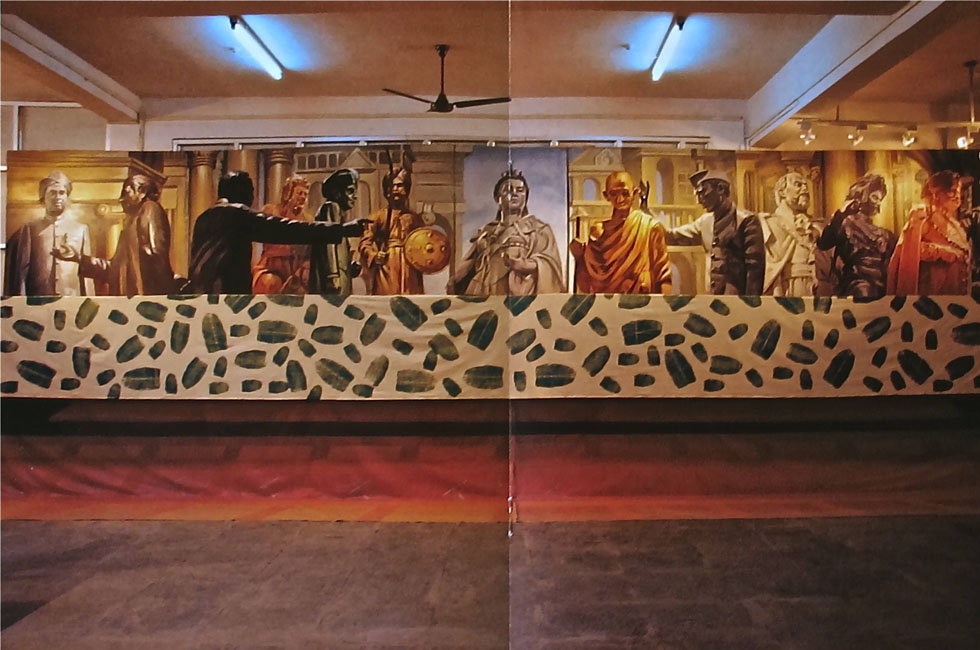 Ramesh Kalkur, who saw the city as defined and mapped by its statues and hoardings, which he calls ‘the urban screen’, commissioned  cinema hoarding painters to create a huge painted tableau around the figure of Victoria, in which twelve important statues of Bangalore dialogue with each other in a work he called ‘The Royal Feast’. The tableau, described as ‘a homage to the leaders’ is a tongue-in-cheek exploration of the political history of the state as revealed by its own monuments and visual culture.

Originally planned to be installed as a spectacular hoarding around the statue of Victoria, it was modified and finally exhibited in the Chitra gallery of the Kannada Bhavana because we were not permitted to use the site. However, the Kannada Bhavana building itself, housing the State Culture Department and  filled with official government portraits, became an appropriately ironical site for the work, which stretched across a whole wall of the gallery like a giant political mural.

The Royal Feast
Ramesh Kalkur
painted and silk screened, size 11 x 34 feet, 1999
Installed at the Chitra Gallery, Kannada Bhavana due to lack of permission for the site. 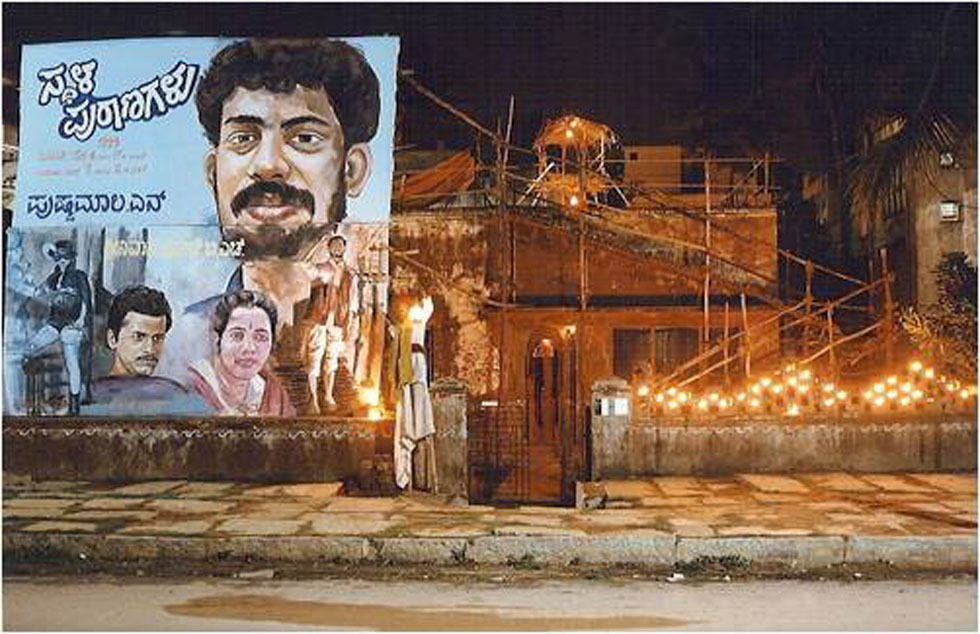 Samudaya was started in 1975, just before the Emergency was declared in the country, when  Prasanna, who had just returned from New Delhi’s  National School of Drama and other intellectuals thought about forming a new broadly left theatre group based on the lines of The Indian Peoples’ Theatre Association’ IPTA and the Kerala People’s Art Club. Amidst intense discussions that took place every day at the Central College lawns in Bangalore, the name ‘Samudaya’ which means ‘Community’ was suggested by the critic Ki Ram Nagaraja.

Srinivasa Prasad’s work uses images and props from the company’s plays to turn the Samudaya House, (once the office of the company and now on the market for new construction) with its ruined outhouse and garden, into an enormous theatre set, part labyrinth, part fairground. Built like a large construction site, its fragile, eccentric pathways turn the rustic inside out, where the city dweller can wander about experiencing the smells and sights and sounds of a lost fantastical rural past…..